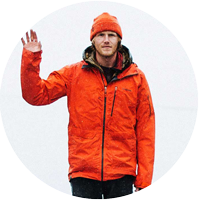 Ben ‘Sturge’ Sturgulewski is infused in all aspects of production as a director, cinematographer, editor, and writer, he’s definitively worked in nasty and awe-inspiring conditions around the world—all while bringing a unique and critical cinematic perspective to action sports, documentary, narrative, and commercial pursuits.

Ben’s integral work with Sweetgrass Productions has spawned several acclaimed films that have appeared in festivals from Banff to Krakow to New Zealand. His work has won dozens of awards for cinematography, editing, and storytelling, as well as numerous grand prizes, including Powder Magazine’s coveted Movie of the Year Award. You can find Ben at sturgefilm.com.

Ben is charging and making waves. Not only in the ski industry but beyond. He understands story and crafts it beautifully not only in words, but in visuals and sound. Ben’s work has a level of fearlessness which stems from a willingness to experiment with new ideas. Ben, like many successful filmmakers, is a busy guy but shares what he knows with up & coming filmmakers. His energy and passion for filmmaking is infectious.