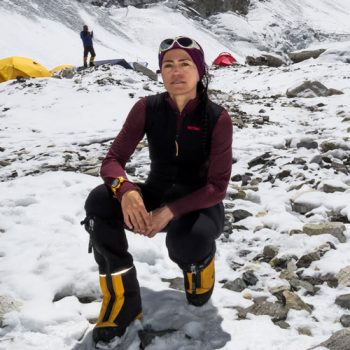 “I’m just not from around here.” She says it often. It speaks to who she is, what she does, and how she does it. She is Claudia Camila Lopez. Her journey begins in Bogotá, Colombia, at more than 8000 feet above sea level in the Andes Mountains. Coming of age in a cosmopolitan metropolis ringed by sharp mountain peaks left its mark. It gave her a passion bordering on obsession with altitude, a love for hybrid cultures, and an eye for the meeting of extremes. It gave her a patient stubbornness seemingly out of proportion to her diminutive stature. And it gave her photography.

For Claudia, photography is narrative. It is losing herself in her grandmother’s stories whilst studying yellowing mementos in her albums. It is the vivid history of Tibetan culture in an illustrated book borrowed from her father. When her mother gave her a Kodak 110 for her 11th birthday, it immediately became an extension of her own thought process, a point of view she could exercise at will. For her, the camera is not just a way of zooming in and capturing from a safe distance. It draws her in closer to her subjects, close enough to read the small print life has etched on their faces. She is inspired by movement, the cinematic image.

At university she studied Communications. Her master’s thesis analyzed the cultural implications of multimedia, especially in education. Her range is uncommonly broad, but a consistent theme prevails. “At the end of the day, just like in the movies,” she insists, “I want to have told a story.”

When she’s not in the studio or on location, Claudia looks for endless glaciers and thin air around the world. A tenacious alpine climber, her successful ascent of Ama Dablam in Nepal made her the first Latin American woman to stand atop that peak and the first Colombian woman to summit in the Himalayas.
She is fascinated by Antarctica. She wears unusual shoes. She can dance. And she is very proud of her Latin Culture.

Claudia thrives on giving back to the community through teaching and by donating her talents as a photographer and explorer to philanthropic endeavors around the globe.