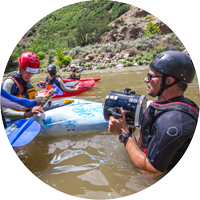 Over the last two decades, Michael Brown has climbed to the top of two of the world’s most demanding professions. As a world-class mountaineer, he has summited Mount Everest five times. As a three-time Emmy award-winning filmmaker, he has made over fifty expeditions to all seven continents, all with cameras rolling. Michael has made a habit of going to the world’s harshest, most dangerous environments – the South Pole, the North Face of the Eiger, and 1,500 feet underground in caves – and always comes back with incredible footage and compelling stories. Outside Magazine describes the cerebral filmmaker as a “swashbuckling librarian”, and Men’s Journal calls him “a master of gut-dropping action.” As Founder of the Adventure Film School, Michael practices another of his favorite pursuits: teaching.

While Brown has always loved telling stories (he grew up in family of adventure filmmakers), he also has a passion for science–especially climate, weather and geography, all of which he studied at the University of Colorado at Boulder while working at the National Snow and Ice Data Center. He’s put that knowledge into practice during productions for National Geographic Television, NBC, CBS, ABC, ESPN, OLN, the BBC, Rush HD, and the Discovery Channel.

With camera in hand, Brown goes into some of the world’s most hostile environments—where there’s little room for error—and comes away with stunning visual footage and stirring stories that remind us of our shared humanity. He believes that if you can imagine a goal, you can achieve it, and he brings that spirit, intensity, and invaluable expertise, to every project.

What You’ll Love About Michael

If Michael Brown had a second calling, it would be teaching. Michael believes strongly in learning through experience, which is one of the reasons why he founded Adventure Film School.  For someone who’s spent over half his life climbing the tallest mountains and hanging off the side of cliffs with cameras, he’s dedicated a lot of his time to teach others and giving back to the community. Michael is a wizard at storytelling. He understands not only what can make a great story, but how to get it. His teaching style is supportive but allows new filmmakers to explore their own bounds and make their own mistakes. Michael’s experience in television, feature length films, and in web content give students a deep view into this industry.